More than a decade ago, Bitcoin introduced itself to the whole world, since then, the crypto space has grown rapidly and created one miracle after another. Today, a brand new asset named Bitcoin Asset is here to recreate the momentum of Bitcoin with more advanced developments. BTA, the token of Bitcoin Asset, will be listed on LBank Exchange at 22:00 (UTC+8) on October 11, 2021. 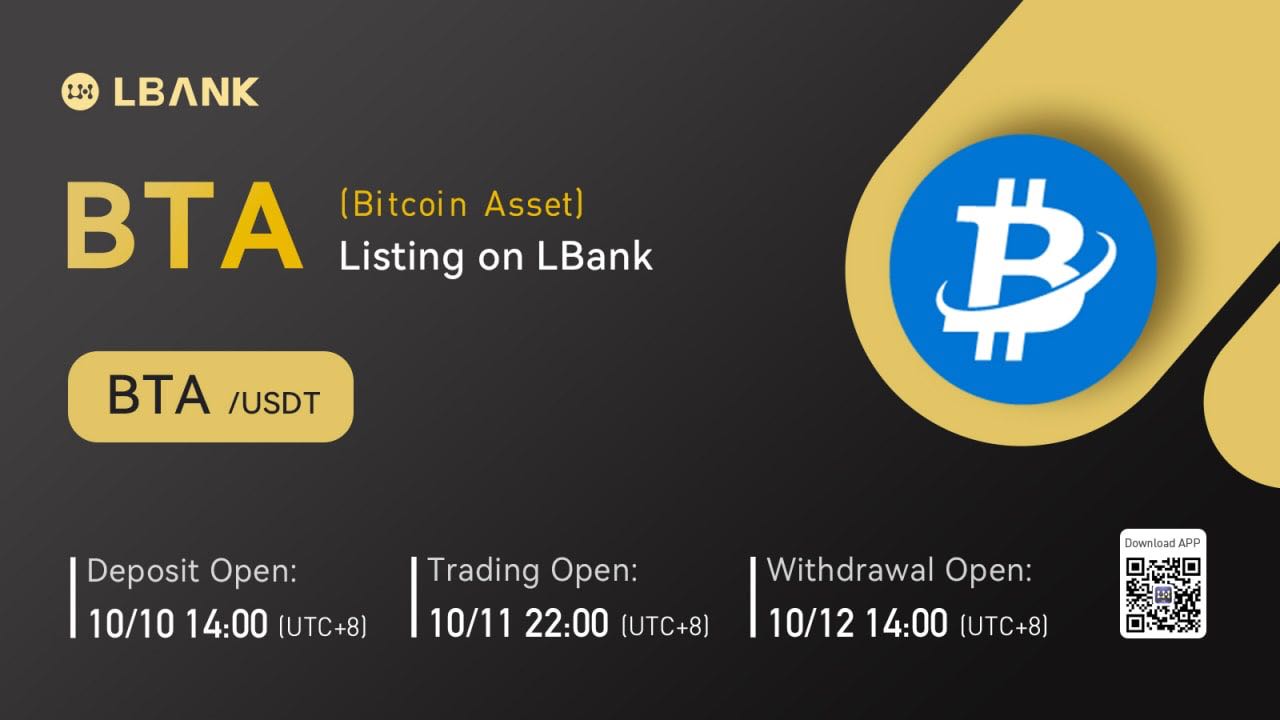 Bitcoin Asset hopes that with the presence of BTA, it can bring back the momentum of Bitcoin like 10 years ago. Bitcoin itself is the mother of all coins that exist today. Therefore, BTA also relies on Bitcoin to create the current euphoria of the market but with new sophistication and much more complete protocols and features.

Bitcoin Asset combines bitcoin with the current developments, namely protocol, Defi, swap and NFT. Thus, BTA is an asset that deserves to be valued the higher in the future and is worthy of long-term storage like Bitcoin.

The BTAChain is a protocol developed by the BTA team itself without the interference of any other protocol team. It is an open-source protocol in smart contract documentation for everyone. BTAChain invites all developers to join-in and create win-win solutions with all customers.

BTAChain is also designed to be environment friendly, which allows its blockchain to run on the server without having to active computer for 24 hours. It aims to provide the lowest possible fee and fast transactions, every Bitcoin Asset transaction or token registered on BTAChain is subject to a very low fee starting from 1 GWEI.

In addition, the wallet address of BTAChain is very user friendly, it is a fork of ethereum, where the ethereum wallet can fuction as a recipient/sender of Bitcoin Assets, coins or tokens under its network. The wallets used in BTAChain can be synchronized to several protocols on the market eventually.

The BTAChain network can also be connected to various protocols with a bridge system built using smart contracts. Crosschain transactions in its blockchain can be monitored by anyone to ensure its transactions run openly and transparently.

The Tokenomics of BTA

With a very limited supply, which is only 5 Million Bitcoin Asset Coins, BTA can be an alternative future crypto asset, in addition to the limited supply in the Network, BTAChain is a solution for token transactions with very low fees.

Pacaso To Accept Cryptocurrency Payments For Purchases Of Second Homes

Cryptocurrency exchange FTX reached a valuation of $25bn in a new funding round that includes heavyweights from traditional finance,...

Pacaso To Accept Cryptocurrency Payments For Purchases Of Second Homes

The CFTC Was Proved Right On Bitcoin Futures. What’s Next For The Agency? –

On Sept. 29, 2021, the U.S. Commodity Futures Trading Commission (CFTC) announced it had filed 14 complaints against various...

CNBC's Jim Cramer said Monday he thinks cryptocurrency markets may put in a near-term top thanks to the impending...